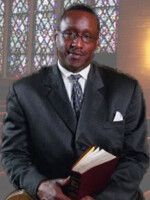 Rev. Dr. Quentin Wallace was appointed to be Covenant’s Senior Pastor effective July 1, 2015. He is husband to Dr. Brenda Ingram Wallace, and father to Cristen, Quenel, Thearren and Jaedon. Pastor Quentin earned a Doctor of Ministry degree from Palmer Seminary in May of 2018; Master of Divinity from Eastern Baptist Theological Seminary in Philadelphia Pennsylvania; and a Bachelor of Science from Coppin State College in Baltimore MD.

Rev. Wallace uses his drama ministry as a medium for evangelism. To his credit he has written several gospel plays and skits: His most recent stage play “Another Day’s Journey” November 2010. He has also written two other stage plays, “Sistah Soul” performed in 2004, and The Trial of Cleotis Jenkins” in 1998. Rev. Wallace was in the cast of stage production “Behold the Lamb” at Sight and Sound theaters in Lancaster PA during the 1999 season.

Pastor Wallace uses his gifts in teaching, preaching and drama to reach many for Christ. He is a dynamic preacher and teacher who practices the tenets of the Great Commission that commands followers of Christ to go into the world to preach the gospel and make disciples.