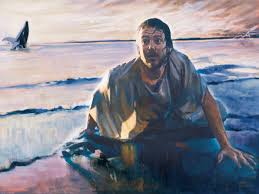 Do not be anxious about anything, but in every situation, by prayer and petition, with thanksgiving, present your requests to God. Philippians4:6

From inside the fish Jonah prayed to the Lord his God. He said: “In my distress I called to the Lord, and he answered me. From deep in the realm of the dead I called for help, and you listened to my cry. You hurled me into the depths, into the very heart of the seas, and the currents swirled about me; all your waves and breakers swept over me. I said, ‘I have been banished from your sight; yet I will look again toward your holy temple.’ The engulfing waters threatened me, the deep surrounded me; seaweed was wrapped around my head. To the roots of the mountains I sank down; the earth beneath barred me in forever. But you, Lord my God, brought my life up from the pit. When my life was ebbing away, I remembered you, Lord, and my prayer rose to you, to your holy temple. Those who cling to worthless idols turn away from God’s love for them. But I, with shouts of grateful praise, will sacrifice to you. What I have vowed I will make good. I will say, ‘Salvation comes from the Lord.’” And the Lord commanded the fish, and it vomited Jonah onto dry land. Jonah 2:1-10

Because preachers speak so often, most people would be surprised to hear that a preacher would be at a loss for words. However, after witnessing the proliferation of the Covid-19 virus and its domino effect on our way of life, I honestly do not know how to respond. It is at these times we consult God through prayer and the scripture for guidance. Paul, in the letter to the Philippians passage listed above, admonishes the faithful to approach all situations with prayer so we are not overcome with anxiety.

The book of Jonah records the story of Jonah the reluctant prophet who did not wish to follow God’s directive for him to go to Nineveh and preach to a city of people who were living lawless lifestyles, so they might repent and avoid utter destruction. Because he did not like the Ninevites and couldn’t care less if they were destroyed, his response was to board a ship headed to Tarshish in the opposite direction. According to the story, God sent a storm that stopped the ship’s forward progress.

In order to move forward, Jonah had to be removed from the ship, and he was cast into the raging sea. Miraculously he survived drowning by being swallowed by a great fish and dwelling inside this great fish for three days. While being isolated in the depths he had time to reflect on his decisions. According to the story, he prayed to God.

In response to Jonah’s prayer of repentance, which is listed in the Jonah passage above, God allowed the fish to upchuck Jonah onto the beach near Nineveh. In keeping with his promise to God, Jonah walked through the city of Nineveh crying out to the wicked residents that they were facing impending doom within 40 days unless they repented. To Jonah's surprise they heeded the warning, expressed signs of repentance of their sins, and showed a reverence for God. The city was spared destruction.

To pray is to have a conversation with God. Why not hold conversations with God? After all, we talk to everyone else. To repent means to simply turn around or change direction and to go another way. There is nothing magical about refraining from or turning away from practices that will bring harm to you or others. In the story passage above, both the Ninevites and Jonah had to change direction and mindset.

During this time of pandemic, some people may feel as if they are in a great fish, isolated with plenty of time to reflect. During Jonah’s time of isolation, he decided that to follow God’s purpose for his life was the better choice. When he preached in Nineveh, those in the city who heard his words decided that to follow God’s directive was the better choice as well. In what ways do we as an individual, as a family, as a nation need to turn away from or make better choices in order to survive? Pray for our nation and our world because we are in a “big fish” situation. God delivered Jonah and the people of Nineveh because of their prayers of repentance, and I am confident that prayer will make a difference for us.